Just how much Democrat criminal corruption is enough before we finally get Obama and Reid out of Washington? King Hussein and Harry Reid should be in a cage!!!!….

Darrel Issa has launched yet another investigation into Democrat corruption, this time concentrating specifically on Harry Reid and Barrack Obama and their involvement into BLM Gestapo-tactic land grabs (Clive Bundy). Obama and Reid didn’t want this to hit the fan. 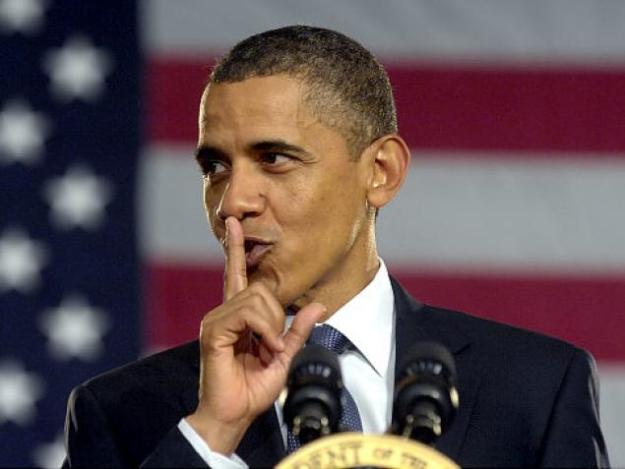 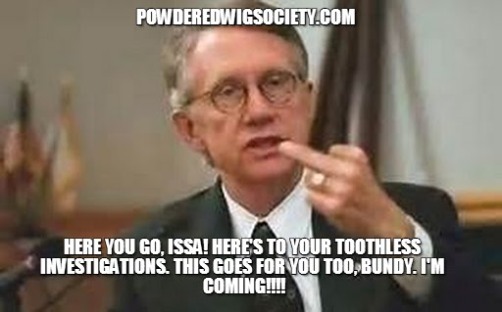 Claim number one: Senator Harry Reid’s son, Rory Reid (try saying that name ten times as fast as you can), is the primary representative for ENN energy group, a Chinese energy company involved in a $5 billion solar project planned for Clark County Nevada, on the on land where the Bundy ranch is located. First source: Reuters: Aug 31, 2012. Well this is interesting. It turns out that the conflicts of interest in this project were well documented, but Harry pushed it through anyway. He pushed it through in spite of the controversy that was stirred up when the land was sold to ENN for $4.5 million dollars even though separate appraisals valued the land at between $29.6 million and $38.6 million.

Claim number two: Reid put one of his former employees in charge of the Bureau of land management and thereby used his leverage in the agency to clear the Bundy’s off the land. What do they claim as their source: CBS Las Vegas. Hmmm… That’s interesting. Neil Kornze, the current BLM Chief is a former adviser for Harry Reid, and Harry Reid is the Senate Majority leader, and therefore was directly involved in his confirmation. That’s another serious conflict of interest there considering that the BLM is claiming jurisdiction over the land where Rory Reid’s company wants to build.

But do we have any evidence that Reid actually exercised that influence in the agency to get what he wanted? Well that brings us to claim number three: Supposedly the BLM had posted on their website that they needed to get the Bundy family off of the land to make room for the energy project, but the BLM has since removed the page. The website that made this claim posted a screen shot split into two files and a link to a text version of the page that someone had copied. This is pretty weak. Though it does seem to match the overall narrative here, this would never be admissible in court. But let’s dig a little deeper shall we. What if there is a version of the site cached somewhere on the web? Let’s try the way back machine on archive.org. Nope, no dice, the page was never cached on way back machine. Let’s try google’s cache… BINGO! Here it is folks. This is google’s record of what used to be on the site.

“Non-Governmental Organizations have expressed concern that the regional mitigation strategy for the Dry Lake Solar Energy Zone utilizes Gold Butte as the location for offsite mitigation for impacts from solar development, and that those restoration activities are not durable with the presence of trespass cattle”

They specifically referred to the solar project as a justification to seize Cliven Bundy’s cattle.

Funny thing, we found the mitigation strategy for the Dry Lake Solar Energy zone, and guess who wrote it? That would be the BLM. Pretty convenient, for Harry Reid isn’t it?

Now I took a screen shot of the Google cache right away. As I’m compiling this information I go back and I look at it again an hour later and what do you know, somebody came and took the cached version down. Somebody is trying to cover this thing up and fast. But you know what, they missed one. I found this cached version of the page on archive.is. If you follow the link in the description to our website SCG News.com you’ll find a direct link to this page. I highly recommend that each and every one of you go and verify its contents for yourself before someone has it taken down.

Click here to view the cached version of the page that the BLM was desperately trying to hide.

Or click here to get to that link from another path.

But even if they take this last link down they left trail. Google’s server logs will still have a record of the exact date their cached snap shot was taken, chances are they still have that snap shot, and you know what? Even if someone tried to erase it completely, with modern technology It is very easy for forensic technicians to recover data like this even if it seems to be deleted from the system. The digital trace is still there. The BLM’s servers and every computer involved also have a trail, and trying to remove that trail would leave an even bigger trail.

All we need is somebody in law enforcement with a spine, but that’s another story isn’t it.

This isn’t about turtles folks. It’s not even about cattle. This is about money and power.

Turns out our little friend Harry Reid has a nice little empire rigged for himself in Nevada. Let’s take a look at this article from the LA Times. This is from 2003. Apparently it’s no secret that Harry’s way of profiting off his position is by using his influence to push through deals that help his family members. He’s got family representing virtually every major industry and they are doing quite well thank you very much. Thing is, this is technically not illegal. In fact it has become the standard way to bribe politicians in the United States. You can’t line their pockets directly, but you can line their son’s pockets, and their cousin’s pockets and their uncle’s pockets all you want.

However using a federal agency to seize cattle, and physically intimidate and brutalize a family to facilitate that dirty deal. That’s all kinds of illegal. Then they to attempt to cover up the evidence… and that’s also a crime.

Again, all we need is a law enforcement officer with a spine.

I’ll be perfectly honest. When I saw some of the media personalities that were capitalizing on this this drama, I was very skeptical, but once I saw what was really going on I understood right away why people’s blood is boiling.

Take another look at what happened on that ranch, the military style crack down, the violence. Imagine Clive Bundy was your father or grandfather. Imagine if his wife was your mother or grandmother. Imagine it was your family who’s livelihood was being destroyed by some filthy rich politician who just can’t get enough.

What happened in Clark County Nevada struck a nerve with the American people, but the response we saw had very little to do with this particular crisis. There is something much deeper brewing under the surface in the United States. This showdown was just a catalyst.

It wasn’t the greatest atrocity of the decade or even of the year. I wish people had felt this moved by the NSA’s domestic spying program, or the secret kill list, or the drone program, or the Libyan war, or the Iraq war or the Afghan war. I wish people had been activated by something bigger than the plight of a cattle rancher. But you know what? We don’t get to pick the breaking point.

Rosa Parks sparked a civil rights movement with her refusal to sit in the back of the bus. Clive Bundy almost started the 2nd American revolution by refusing to let the feds run him over.

What we saw in Nevada clearly demonstrated just how easily that breaking point can be reached.

Now even knowing the real story, hearing about militia mobilizing all over the country to come physically defend the Bundy family is probably still very disconcerting for many progressives, this was a very dangerous situation. A lot of people could have ended up dead. But consider this: remember back in 2011 when riot police swooped in to brutally crush the occupy movement? Remember how you felt? No one stood up for them. No one fought back. And what was the result? The thugs won.The media quickly switched to a new distraction, and the public forgot.

Imagine if it had been different. Imagine if people swarmed in from all over the country; not to wave signs in the air, but to stand up for your rights; even if they disagreed with you politically. That didn’t happen, but it should have.

It’s been said that the enemy of your enemy is your friend. Trouble is, the people of the United States have been a bit confused about who the enemy really is. You’ve been allowing a thuggish, out of control, corporate owned government to persecute your ideological rivals, not realizing that the same boot will someday be grinding your face into the dirt. And all the while your common enemy, your real enemy gets stronger, and more aggressive, more lawless, and more blatantly corrupt as we dance the left right left right two step to tyranny. They’ve been playing you like a fiddle.

But the sleeping giant is starting to wake up.

And they are scared to death of you.

Now as for Harry Reid. He may just be one rotten apple in a barrel full of rotten apples, but he needs to be brought to justice.

To all of you out there who call yourself law enforcement, the American people are putting down a line the sand. If you don’t stand up for justice, if you do not hold these scum bags accountable for their crimes, if you do not at least raise your voice and take a public stand then you are an accomplice. You are discrediting the entire framework of law and order, and you are giving the people a clear mandate to remove you from your office.

Dedicated to the restoration of and strict obedience to the United States Constitution.
View all posts by thomas madison →
This entry was posted in Main page and tagged blm, bundy, cliven bundy, corruption, criminal, harry reid, liberal, obama, scumbag, trash. Bookmark the permalink.